Reflections of a Babywearing Dad

As we’re getting closer to the end of IBW 2012, I felt like I wanted to post something about Babywearing
in general. For those of you who don’t know me, I was a reluctant babywearer. Our first child had survived three years without needing more than a stroller that my wife for some reason hated. When Ann Marie decided to try babywearing, I was expecting it to last for about two weeks. Long enough for her to forget about it one day, and then have the carrier lay forgotten in a corner like so many baby bottle cleaning apparatuses. 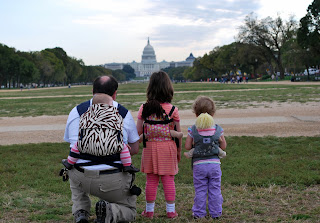 They were the first real “Mommy-Friends” my wife had. They were a group that took her in, unconditionally, and helped my wife down a path that has reaped innumerable rewards. She was able to do things; from playdates, to meetings, to group lunches where they descended upon whatever poor soul was working the counter and forced to clean up after 8 toddlers.

She started talking to me when I came home from work about things she was learning. I heard about things that happened between her and her friends. A steady stream of carriers came and went as she borrowed and tried them. She was only given constructive criticism like: “Try this adjustment,” “Maybe you want something slightly different like this carrier,” “Your child may be more comfortable if you do this”. What I saw was my wife learning the entire time. She wasn’t force fed anything; she was able to find her own way. As a result of this wonderful group of people, my wife is able to do things I don’t even comprehend. Because the group had the smarts to let her work through her problems, my wife will grab a wrap and be able to tie a  Half-Tibetan-full-ruck-Nyarlathotep-ian high-back-carry with a twist of lime.
The BWI group had made my wife enthusiastic. She in turn made me, not exactly enthusiastic, but receptive to the idea of babywearing. I wore our second daughter occasionally when I was forced. I even watched as a carrier came to the house “for me”. Was I a babywearing dad? No. But I was a dad who wore my child occasionally with only a little bit of embarrassment. The fact that our second daughter would only decide to sleep after a brisk winter walk at night meant that I’d take the strange looks if it let me sleep. The embarrassment was worth the ability to rest. 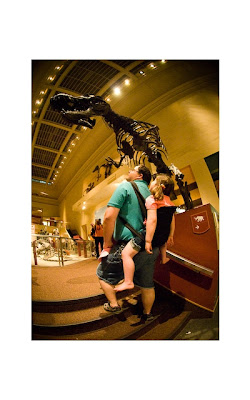 The real turning point for me came when my wife told me we were going downtown to the National Mall for babywearing photos. My eldest daughter decided that while we were waiting for everyone to show, she’d run laps in new sandals. Funny enough, after a few minutes she had a blister that oozed whining. I broke out the Kozy “I” had purchased, and popped her on my back. Four hours of fifty small child pounds later, we had finished. Reflecting on the process I realize I was able to fix my daughter’s problem without any damage to the outing we had planned. I also didn’t have to lug a stroller all over God’s green creation just in case. That’s when babywearing went from something fluffy and ambiguous to something concrete with real value.


The other big event that turned me into a Babywearing Dad was in the hospital with the birth of our third daughter. My wife was recovering from her third C-section and all she wanted in the world was a shower. The nurse had come into the room just as we were getting ready for the shower. I was in the middle of putting on the wrap so I could hold our day old daughter and help my wife to the shower. I’m halfway through tying the wrap on me and the nurse is staring at me like I’m about to jump out the window. Once I finish tying the stretchy wrap the only way I know, I plop our little daughter into it and watch the nurse as she’s taken aback. “Wow, you really do know what you’re doing” she said.

At that point I realized that I had a couple of things working both for and against me. I was a dad, and if TV commercials are to be believed, I have as much chance of taking care of a baby as I do de-arming a bomb. I also was doing something completely foreign to this nurse’s experiences. However, I had a great teacher and wasn’t worried about screwing up. I’d like to think that once the nurse saw what I was doing, and how much it helped me and my wife be independent in taking care of our child, she had a better understanding of how babywearing is beneficial.

My family has become very vocal advocates. We see how wonderful and useful babywearing is, no matter the form it takes. We spend a good amount of our free time trying to positively help and encourage families to babywear. And frankly, I’ve seen it do a world of good. If I can be convinced, I’m sure anyone can.

Posted by Corey
Posted by Metro DC Babywearing at 2:19 PM