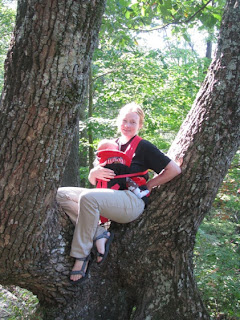 For as long as I remember, I’ve been a nature-lover. Walks in the woods observing interesting
fauna and flora and hikes to places both familiar and new have been some of my favorite activities since childhood. Before we became parents, my husband and I enjoyed visiting and hiking in national, state and local parks. We’ve never been “hard-core” hikers covering 20-mile trails, but we found pleasure in treks of a few miles.

Prior to my son’s birth, I had some knowledge of babywearing, because my parents had worn my older brothers and myself in old-school Snuglis and framepack carriers, and my younger brothers were worn occasionally in the backpack and very frequently in ring slings. I even wore them myself sometimes as a teenager. I didn’t know about mei tais or SSCs or wraps before my son was born, but
I learned about these different carrier types more or less accidentally via the internet and was able to further expand my exposure to carriers and carries when I attended my first babywearing meeting right around my son’s first birthday. 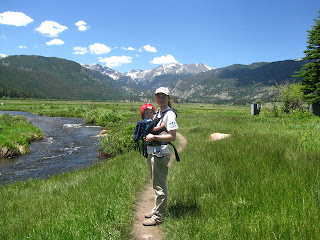 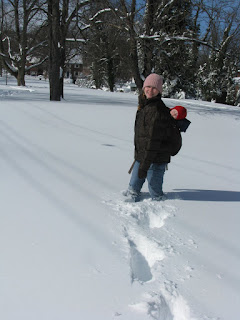 I suppose because we already knew about babywearing, it never occurred to my husband and
I that we would not take our son with us on our outdoor adventures from an early age. When my son
was two months old, he went on his first hike in a mei tai sewn by my mother-in-law and that I learned to use via pictures and instructions I found online. It was about a two-mile roundtrip hike down to a waterfall and back. Given that my son was so young, we had to stop multiple times for diaper changes and to feed him, but it felt so nice to start sharing my love of the outdoors with my infant and to have him close while doing something I enjoyed so much. 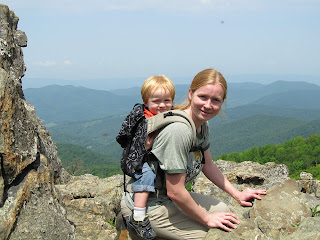 Over the past three and a half years, babywearing (and toddler-wearing) has made it possible
for us to take our son on hikes in the Colorado Rocky Mountains, to overlooks and waterfalls in
Shenandoah National Park, to gorgeous vistas in the Grand Tetons, past brilliant-blue geothermal
features at Yellowstone National Park, on hikes when visiting our parents, across snow-covered fields, and on many other outings. Wearing him has allowed us not only to carry him much further than he could go on his own but also to keep him safe near overlooks, drop-offs, and scalding hot pools and geysers. As he has grown, he is worn less and less as he builds up stamina (and common sense :-) and becomes a decent little hiker himself. Had it not been for babywearing, had we waited until he was “old enough” to complete hikes on his own, would he be able to hike as far or enjoy the outdoors as much as he does at age 3? Maybe he would; it is hard to say. But even if that were true, we would have missed out on years of sharing close-up experiences with the natural world, and a desire to explore what it has to offer, with our child.

Posted by Genny
Posted by Metro DC Babywearing at 8:53 AM No comments: