Babywearing on the National Mall

Festival crowds on the National Mall -- a perfect day for babywearing! My three children are 7 1/2 and 5 1/2 years old, and 6 months (referred to as Monkey1, 2, and 3), so keeping mobile and having a nursing cover handy are key to family outings. The National Book Festival was a perfect example of a day of wearing and wrapping my baby.

We arrived on the grassy Mall around noon, found shade, and unpacked our lunches. I folded and spread out my wrap as a blanket for the baby, but since she's mobile, this merely marked her starting point as she investigated first the grass and then turned her attention to capturing the various sandwich containers.  Once everyone had lunched, I wrapped her up in a front carry, 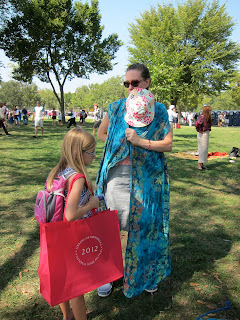 to try to keep an eye on her sunhat and accommodate my water pack on my back.  We spread out to enjoy the activities and authors under the tents.  Monkey2 wanted to meet her favorite PBS characters, so we stood in line for pictures. Front-wrapped, Monkey3 has perfected a rotate-and-grab action, so she was flailing for the camera in my hand.  When we rejoined Dad and Monkey1, who had been listening to singer-songwriter and now children's author Jewel, we all tried to move into the tent and find seats to listen to Mary Pope Osborne, author of the Magic Tree House series.  There were no seats! We edged back out, ending up next to the outer perimeter tent poles, and while we could hear, we could not see well. Not that it was really important, except to children it is important to see their favorite author! So my husband hoisted the 7 1/2 year-old on his shoulders, after putting the 5 1/2 year-old on my shoulders.  And yes, I still had little Monkey3 in a front carry.  I really wish we had a picture of this carrying, one kid on my shoulders and one wrapped to my front!  After awhile Monkey3 decided she was hungry, so I dodged out, found a bit of tree shade, unwrapped Monkey3, and draped in my 6 yards of wrap material, calmly nursed her amid the throngs of the National Book Festival.

Next we headed to the book signing line for Jewel with a copy of her book, and while waiting, a camera crew came along looking for comments on the Festival.  "I'll talk about it!" I said. Well, how could any producer resist the cute baby attached to me?  Monkey3 could not resist reaching for the microphone either.  Nor could she keep her hands off the book's shiny dust jacket. 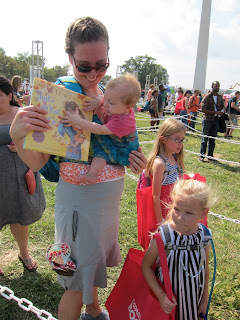 We met Jewel! Where was Monkey3 looking?! 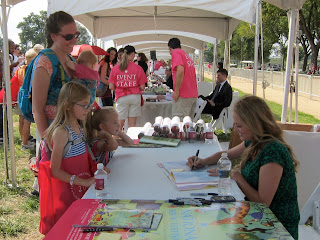 Then we joined the lines for Mary Pope Osborne to sign a book, and hot little Monkey3 wanted some variety. I tried, unsuccessfully, to front wrap her facing outwards (I had seen a YouTube video where the baby's feet are sticking out in front of her bundled body), and then resorted to a back carry. Except then she decided she'd rather eat. So again, nursing on the Mall, with her hidden under the wrap, waiting in line #10 of many more lines waiting to meet the Magic Tree House author.  My husband was amazed that I just stood there and fed her, not deserting the line.  Then I wrapped her in a back carry again.  Waiting in line is dull, but the people around us certainly had some entertainment watching me wrap up a wiggly six-month-old. Unfortunately the book signing did not go as well, as we heard from festival volunteers that the author was rubber stamping books, not actually pen signing them, and then, that the line was so long, more festival volunteers were dispatched with copies of her signature stamp. We abandoned the line.

Walking back to one of the children's activity tents, Monkey3 fell asleep on my back, and I pulled the wrap over the side of her head, supporting her limp sleepiness in a cozy pocket.  Family outing, several meals, and her afternoon nap -- now that's a good day of babywearing!

Posted by Maria
Posted by Metro DC Babywearing at 9:44 AM