We've been a BWI chapter for about a year now, and we've managed to gain ONE official member in all that time.  Now, it's true, we offer our expertise and vast stashes to anyone to try without payment, but in order to keep the message strong, provide handouts, maintain the carrier library, and help BWI in its efforts on a national level to keep the CPSC from banning slings outright, we need your support. 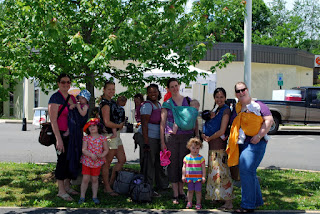 Membership
A one year membership to BWI costs only $30.  That's a little over 8 cents a day.  Do you and your baby get 8 cents of enjoyment daily from wearing in a comfortable, ergonomic and fashionable carrier?  Do you want to help other parents to do the same?  Joining BWI can do that. 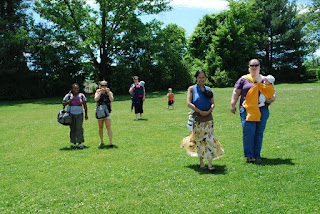 How do we spend the group money?
- We are joining the BCIA as a supporter, this will help our favorite carrier manufacturers fight to continue making safe, comfortable, and beautiful carriers
- We are ordering much needed supplies for the library, over time pieces such as chest straps, inserts, etc have gone missing
- We want to order brochures to have on hand for meetings and hope to eventually expand outreach to public places like farmer's markets, town festivals, and parades.
- We hope to expand meetings in Maryland and will need to develop new locations and establish the library
- The National organization gets a portion of the funds to use for its outreach as well as to cover expenses like insurance, web hosting (including our private forum), etc. 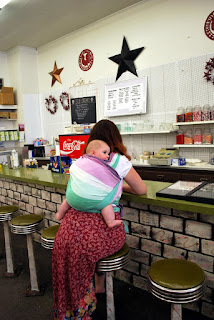 What do YOU get from becoming a member?
- Well, you help US spread the love of babywearing
- You get some groovy BWI stickers, and maybe a bracelet? (I'm actually not sure what's in the member pack)
- You are eligible to borrow the Sakura Bloom silk sling for your special occasions
- You get a warm fuzzy feeling in your heart
- You get entered in a raffle for a NEW Sleeping Baby Productions ring sling

Wait, back up, what was that last one?
Yes, it's true, you will be entered in a drawing to take place at the September Tysons meeting (THURSDAY, September 9th) for a brand new SBP ring sling.  Does your spouse/ mom/ mother-in-law/ grandfather want to support the efforts of BWI?  They, too, can join and get a raffle entry. 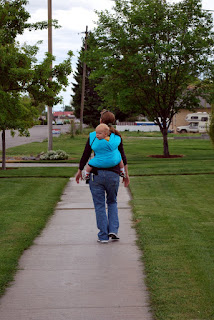 For more information on how to join, attend any meeting in August, or email BeltwayBWers@gmail.com.
Posted by Metro DC Babywearing at 7:40 AM 2 comments:

Bottle Nursing: Feeding in a Carrier

Eating in a carrier: This is really, really easy. Put baby in carrier, put food in mouth; best accomplished without super-hot or splashy food that might fall on the baby in the carrier... what?  Oh!  Um, strap baby to chair with carrier, feed baby... no?

Oh, right – feeding the baby while in a carrier on an adult! Yeah, I knew that. Chalk it up to “mommy brain.” Many women are back on the breast-feeding bandwagon, as well they should be (heck, it’s my preferred method too!), but not all of us are fully equipped for that task, whether they be fathers, mothers, grandparents, sitters, or other family. But we still need to be able to go about our lives, doing chores, chasing after older siblings, feeding ourselves, and that lump of love still needs to eat - all the freakin’ time. 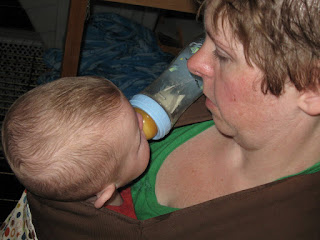 So back to the beginning: Feeding in a carrier, with a twist, or a bottle.  When I wasn’t able to breastfeed the first time around, I didn’t even think about feeding in a carrier – I was too overwhelmed with guilt, and relief, frustration, and a jumble of other emotions. The second time around, knowing what was coming, I wanted to be prepared. I poked around on a few sites and started threads in some forums asking if it was possible to bottle feed in a carrier.  The only positive responses I received were “Yes, I did that!” and “good luck, you can do it” types. I was lost, trying to conceptualize where to stick the bottle that would be easy, mimic breastfeeding, and not wrench the poor kid's head back so he’d be in need of chiropractic services every day before his first birthday.  Once he was here, just after Valentine’s Day and with 6’ snow drifts still upon the ground, I made a few half-assed attempts and gave up. Sad but true, I was too tired dealing with both a new born and toddler who suddenly learned to climb, and it was too much of a hassle with our driveway covered in a sheet of ice. 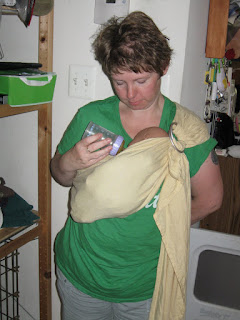 But then, when the baby was about 6 weeks old and most of the snow had melted away, we were able to attend a local baby wearing meeting on a Saturday, to introduce the little guy and check out some more options. There my good friend Rachel asked if she could hold the baby in a ring sling, and of course, I pretty much threw him at her. And then he was suddenly hungry again. “Would you like me to feed him?” I got out a bottle and the dear gal fed him one handed in the sling.  Eureka!  That was our beginning.

We started by mimicking Rachel, and I’d feed him one-handed in a semi-upright position in a ring sling (keeping in mind avoiding the chin-to-chest issue, baby C was almost 2mo when we started this). Once he grew larger and progressed to larger quantities, and thus larger bottles, we changed tactics. I’ve found that it’s actually not too hard to feed him hands-free in a Mai Tei or wrap, by sticking the bottle under a strap by my shoulder with a slight downward slant (front wrap cross carry works well for us).  Some days I still have to use one hand, the positioning just doesn’t always work, but it’s still much better than being stuck on the sofa while the toddler scales another bookshelf. 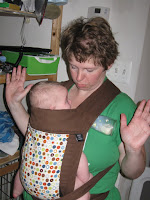 There’s a bit of a learning curve, just as there is with learning to wear your baby safely, breast feed, riding a bike, eating while driving or anything else. But we took it slow, and found that it’s possible.
Bottle nursing in this fashion can help bottle feeding be more like breastfeeding and can help baby to bond with caregivers when breastfeeding doesn't work, isn't possible, or isn't the right choice for a family.  Just because you don't have milk in your breasts, doesn't mean your baby can't enjoy the bonding benefits of being held while nursing.  And just because you want to hold baby and bottle nurse doesn't mean you have to give up accomplishing others tasks like chasing the toddler around the playground.

Safety tip:  Bottle propping for hands free bottle feeding should wait until baby is 4mo or so and is consistently able to keep up with the flow.  Baby should of course be monitored at all times while feeding in a carrier whether it be by bottle or breast.

In this installment, we have videos for both front and back carries in a soft structured carrier.  Ann Marie apologizes if her hip scoot looks awkward, she doesn't hip scoot because it feels awkward to her, so it probably looks like it.  The sound is a little low, sorry, the videos were done in a park and there was enough ambient noise to make it hard to hear in some spots, but the methods are pretty clear even without the sound.  Hopefully they are useful to someone.

Posted by Metro DC Babywearing at 8:47 AM 5 comments:

People often ask if babywearing hurts (or as is more often the case tell you it is hurting you, the baby, or both...).  I was stopped just yesterday and told that I wouldn't be able to carry my 6mo old much longer because it would hurt my back... I pointed to my 2.5yr old and pointed out that I regularly carry her, so I think the baby has some time.  What I didn't mention is that while my BACK doesn't usually hurt, my head on the other hand.... 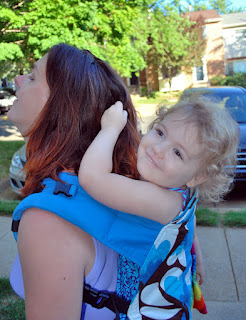 Finding a good choice for your hair can be an important part of successful wearing. I know one mama who said she allows hair pulling without reprimand while back wrapping because it keeps the baby laying flat and still.  However, once the wrapping, tying, or buckling is completed, how can we keep little fingers from pulling our hair out (we have to leave a little to pull out ourselves when they get to be teenagers). 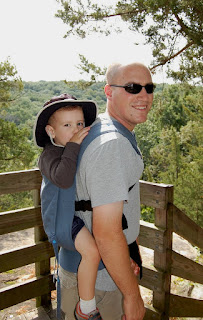 We could go with the shaved head route, but honestly, while hot on dads, that isn't a good look for most moms (but if you can rock it, go for it!). 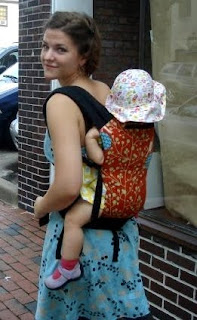 Another option is just a cute short cut.  Kim is totally stylish with this cute pixie look.  Her hair is up and away from wandering hands.  But some mamas (and dads) don't want to cut off hair just to be able to wear their little ones, some just don't have the bone structure to pull off short hair, and let's face it, some of us just never have time/money to get to the salon and have long hair by virtue of laziness.  So what options are there for the long-haired parents out there? 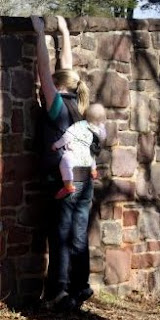 Ellen is showing a simple ponytail.  For many this is sufficient, especially if their hair is around shoulder length.  But notice if hers was any longer it would be right in baby's face.  This can be annoying for the little one.  My two year old is VERY put out if she tries to put her head down to sleep against me and encounters my hair... apparently it "ith-ez." 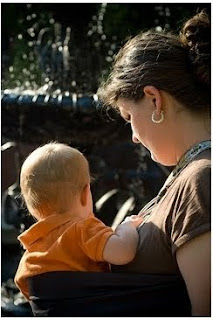 So, what other options do we have?  Meaghan is showing a simple twist to get that hair up and off the neck and contained.  This is both great for cooling mom in warm weather, AND has a babywearing bonus! Great potential here! A twist can be achieved quickly while also chasing your preschooler through the park apologizing to the people and dogs whose path he has barged across. 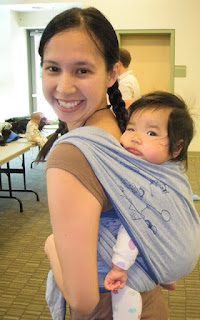 Some mamas have thinner hair that doesn't stay in a twist very well, for those mamas some braids like Angelique is demoing can work wonders for keeping hair out of hands and making mom look cute instead of like the crazy banshee screaming, "let go of my hair you adorable monster!"  Another bonus to this look is it immediately drops ten years, so for some of us we can stop being asked if we are enjoying being a grandparent. 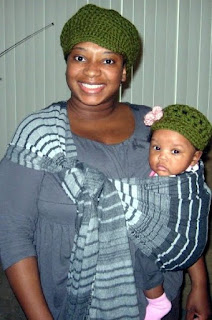 Sometimes baby is just determined and will pull on your ponytail, braids, or even worse those tiny hairs on the back of your neck (ouch!).  To combat that, a groovy hat or headscarf might be the way to go.  Careful on the style you choose, you might find yourself firmly planted in the hippy category by on-lookers.  Then again, being firmly planted in the hippy category might have you dismissed as "un-convertible" by those who are desperate to tell you why you need a stroller.  Hmm, there might be something to that...  Anyway, Cynthia and her daughter are showing off their adorable matching hats.  Ann Marie is showing a Wrapsody headscarf (you can get these to match some of your favorite Wrapsody wraps!). 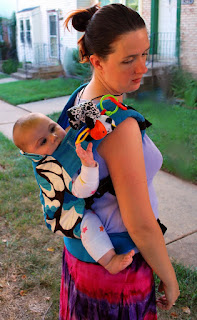 And, lest you get a surprise tug resulting in teaching your toddler some words not covered by Sesame Street, it might be a good idea to attach a toy to your carrier, or have a necklace they can play with to divert their attention from the diabolical hair pulling scheme that the kids all conspire about during "playdates," more commonly referred to as "strategic planning sessions."