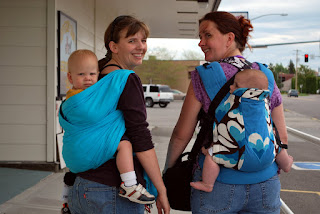 I started the morning going for a walk with the other babywearing moms. This is Susie Spence (the founding president of Babywearing International) and I outside the Rigby Museum.

After the walk I went to my first class of the morning.  Babywearing Safety with Beate Fromme of the Babywearing Institute.  She discussed the German school ideas of spinal development and wearing as well as some of the other issues to be aware of when wearing a baby.  These include the obstructed airway concerns as well as simpler problems such as bumping baby on doorways, etc.  The German schools push the spread squat position from birth.  They feel that the spine best develops when it is in a J position, straight neck and then curved lower back.  They don't recommend the cradle carry or forward facing carries at all.  This class was an interesting perspective on safety issues in babywearing.  Beate has several children and my favorite moment was seeing her older daughter (I'd say she was about 10) wrap her little brother on her back without any help.

My second class of the day was Asian Baby Carriers and Soft Structured Carriers taught by Kelley Mason of Kozy and Melissa Radcliffe of TogetherBe.  They demonstrated some of the benefits of these types of carriers.  Then Kelley impressed us all with some tandem wearing.  She showed a handy trick of threading the straps of the back carried child through the straps of the front carried child.  I thought that was rather ingenious.  I wish you could see the Kozy on her back... it says "Nobody Pushes Me Around"  because of course the child isn't being pushed in a stroller. I loved that one.

Then came lunch at Me N' Stans.  The folks there were completely confused by the invasion of hippies, but they seemed to take it with grace.  The food was pretty good, although we had to recall the first rule of small towns which is that meals are anything but fast food.

Email ThisBlogThis!Share to TwitterShare to FacebookShare to Pinterest
Labels: conference