Having three children aged three and under meant that when my first reached her half-birthday, I was already pregnant again. By the time she took her first step on her first birthday, I was far enough along to know that we were expecting another girl. By the time she was running on unsteady toddler feet, I was ready to deliver. The day I was discharged from the hospital with my second daughter, my 15 month old was buckled into her carseat first.

With my first, I got by using a too-large heavily padded closed-tail ring sling and a borrowed mei tai. As soon as she could walk, she strongly resisted being worn. So, it was in parenting two spaced so closely together that my practical experience and knowledge of babywearing grew. 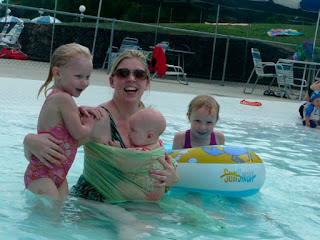 With a toddler that was charming, quick, mama-focused, and adamant about being down and doing it herself thank you very much, it became vital that I wore her newborn sister.

I ordered an open-tailed ring sling that arrived days before my second daughter's birth. I practiced in the hospital and insisted on wearing her as often as I could in the first few days home from the hospital. For two weeks it seemed like I was constantly adjusting, repositioning, and checking on my newborn until I found my 'sweet spot' and I could quickly put the baby in, tighten my rails, and go. Spending so much time those first few days learning the ins and outs of my sling saved me so much time and provided me with so much mobility.

We walked to the playground at the end of our court. My oldest would run, climb, and slide. Her little sister sat in the buddha position in my sling. She took in the world, and napped when she had regarded it for long enough. On trips to the mall, I wore the new one and strollered theolder one. At the play area, I'd let the mobile one run. Once a mom with just a toddler asked me how I managed. Without thinking I carassed my second daughter in the sling and replied, "I keep my hands on one and I keep my eyes on the other."

We'd go to church. While my husband tried to engage our oldest in the liturgy, I would nurse the baby in the sling, using the tail as a cover. I was used to sitting or standing still and nursing discreetly, until one day she was still nursing as it was time to head up the aisle for communion. I made my way to the front of the church, looked the priest in the eye, and made my way back to our pew without anyone being the wiser that not only did I have a baby in there, I was nursing her too. The being able to nurse in the sling further opened up our ability to go and do.

Then there was housekeeping. Baby and I often cleaned house together. She was very afraid of the vaccuum, even waking from a deep sleep if it ran. So I put her on my back in the mei tai and vaccumed while her sister napped. I could also do dinner prep--the washing, chopping and mixing at least during our afternoons. The more I wore my second daughter, the more things I found I could accomplish. Trips to the park, the store, the hospital, the bathroom. Dinner prep, vacuuming, wiping fingerprints off the walls and windows.

While my husband didn't mind that I was eager to wear the children, he was reluctant until he saw firsthand what an effective tool it was. This may be a familiar story to other babywearers, but it happened when my husband had a crying baby, and no mama to fix it for several minutes. He wrapped the baby up in a simple piece of cloth, she settled down, and settled into a peaceful sleep. 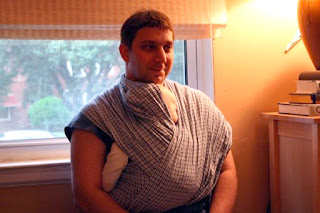 Once he had that experience, he encouraged my interest in babywearing, made it possible to acquire other carriers I admired, and even advocated the usefulness to other new parents. While it seems like I'm spending a lot of time writing about daddy babywearing, I mention it because his interest in wearing made it possible for us to plan for and welcome our third daughter.
While some days never seemed to draw to a close, the time passed so quickly. My second was eager to catch up to her older sister and she was a very early walker. I was able to wear her into her toddlerhood. Often in a soft structured carrier on my back. She frequently napped back there until my belly expanded so much that I couldn't even buckle it low on my hips. We slung for a little while, then all walked together.

When the new baby arrived, my three year old, who hadn't been worn in two solid years, made a return to being worn. It was an excellent opportunity to snuggle with her. My two year old also asks to be carried sometimes, but mostly she just brings me a carrier so that I can wear the baby.

I guess I should explain how I manage, but I'm not sure I can other than to say we do. My husband might wrap the baby if the older girls are particularly interested in having me put them to bed at night. I definitely sling her for a trip to the store, and I wrap her for a longer walk through the neighborhood. I guess it also helps that my children have had siblings for as long as they can remember, so there's little jealousy over the baby. Now that there are three young ones, they have realized that they do have each other, and it's such a satisfying sight to see the two older girls with their heads together playing pretend, while the baby looks on and chews her fingers.

Up until several weeks ago, I had three children, aged three and under. Now I bear the almost-but-not-quite-as-noteworthy distinction of having three children four and under. Passerbys will comment quite frequently “You’ve got your hands full.” The response I learned from a fellow babywearing mama, is “better full than empty”

When I make a trip to Costco, there are three blonde girls with me, two chattering in the cart as one sits on my hip. When we make a trip to the mall, one peeks out from the mei tai while the other two trail behind me like ducklings as we file past the perfume counter The comment I hear most often from passerbys is, “You’ve got your hands full.”

See, the thing is, technically, I don’t. Busy? Yes. Occupied? Most definitely. Rushing in where angels fear to tread? Sure, but no my hands are most definitely not full.

Posted by Ellen
Posted by Metro DC Babywearing at 2:06 PM