This post was originally shared on Marni's blog InsomniMama

When I let the word out that I was pregnant, my friend Lori was the first person to ask me, "Do you plan to wear him?" I had no idea what she was talking about. I had never really heard of "Attachment Parenting" or "Babywearing;"  I remembered my mom carrying my youngest sister in a Snugli, and I knew what a Baby Bjorn was. But the idea of "wearing" your baby was foreign to me - it sounded like some kind of accessory fad.

I did some preliminary research and acquired a Moby and a Baby Bjorn from a friend. When my sister had her baby six months before my due date, they opted for an Ergo. I saw them using it with my newborn nephew when I flew out to visit them; it seemed like just the thing I needed, too! Turned out Lori had one I could borrow, complete with an infant insert, or "baby burrito blanket," as I liked to call it. I was all set for accessorizing myself with an infant, I thought. 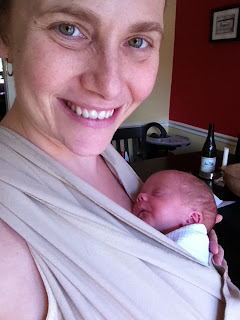 When I brought my preemie Munchkin home, I knew of the importance of skin-to-skin contact, and learned how to wrap him to my chest in the Moby by studying the instruction pictures, watching YouTube videos, and practicing the various wrap options. He was so tiny, that even in the "baby burrito blanket," he was completely dwarfed by the Ergo, and I didn't even try to figure out the Baby Bjorn. The Moby served us well in the first couple of months.

My husband preferred the Ergo. He proudly wrapped our itty bitty burrito guy and wanted to wear him for all of our walks - I, however, was obsessed by checking his head to make sure his chin wasn't tucked too much so he could breathe. (I know I drove poor hubby crazy.) From the start, our 4 1/2-pounder hated walks in the stroller; he wanted to be close to us, so we wore him every time.

Then came the fateful day, when the Munchkin was about to turn three months old, that it stopped working. This magical closeness that we had found was broken - he shrieked and squirmed and cried whenever I tried to wrap him or put him in the Ergo. I was terrified that I was hurting him, and he was still too small for the Baby Bjorn (which I still couldn't figure out how to use). I carried him constantly. My husband could help me wrap the baby in the Moby if he was asleep, but when he woke, there was hell to pay.

The worst was one day in a parking lot, when I tried, unsuccessfully, to put him in the Ergo for 20 minutes; I was nursing him to keep him from screaming bloody murder while I tried to get him in position, and pacing back-and-forth between my open car doors. I finally gave up, got back in the car and went home. I was frazzled and confused - I wanted to wear him because of the emotional bond we were forming, and the practicality of being able to use both my hands, but if it made him miserable, how could I?

My friend Karen saw my painful posts on FB and introduced me to her friend Nancy, who in turn directed me to Babywearing International's MD/DC/VA chapter. I never thought there would actually be a group devoted to teaching people something like babywearing - aren't we innately supposed to know how to do this? (ha!) I read their blog posts, and saw that there was a meeting at the library up the street from my house just 4 days away. Tears began streaming down my face. I couldn't believe my luck!

As with any new endeavor, I was a bit nervous to go - what if they laughed at my complete ineptitude with my baby accessorizing? But I grabbed my Moby, Ergo, and Baby Bjorn, and the Munchkin and I headed out for our library to see what this was all about. 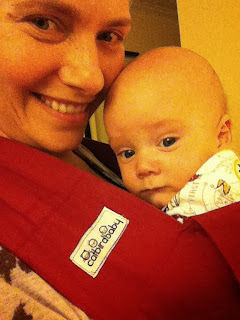 I was early - the first to arrive - but when the moms and babies started showing up, I felt like I was home. (There happened to be no Dads at this meeting.) We all introduced ourselves, and before long, we had formed a nursing circle on the floor while older children played nearby. Each of us had our own reasons for being there, and questions we needed answered, and each need was addressed in turn, along with demonstrations of different wraps and carriers I had never seen before, and kind and gentle advice from all of the Volunteer Babywearing Educators (VBEs) present.

As soon as I told them what had been happening with Munchkin, each of the VBEs said, "Oh, he probably wants his feet out," as I had been wrapping him with his feet pressed to me in a kind of frog-style scrunch. They showed me a Mei Tai (pronounced "may tie" - a square of fabric with four long straps attached at the corners) from their lending library of carriers, helped me put the Munchkin in it, and he promptly fell asleep. It was a miracle. I didn't want to give this magic carrier back - I became a member on the spot so I could "check out" this Mei Tai for a month (a privilege afforded to members), and see if the magic could be repeated at home.

After the meeting, all the Moms went to lunch together, and they coached me through nursing him discreetly in the carrier while at the table so I could actually eat my meal - a whole new world was unfolding before me. We were out that day from 10am to almost 4pm - my longest outing with the Munchkin at that time - and I was giddy with excitement when I got home and showed my husband the magical carrier and relayed the day's events.

The Mei Tai worked. Munchkin happily went on walks with us again, feet out, experiencing the world, nursing in the carrier, and continuing to build our close-knit bond. Each month I went back to the meetings and tried new carriers - other Mei Tai brands, ring slings, woven wraps. I'll keep going back, because there are more carriers I want to try as Munchkin grows and changes, but also because I've come to adore the strong, loving mothers I've met there. (Again, Daddies do attend - I just haven't met any yet!) I learn so much from each of these amazing women about my own parenting choices 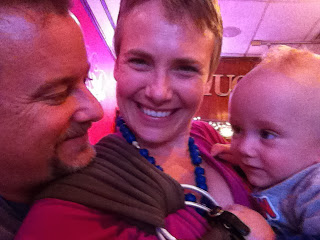 every time I go, and both Munchkin and I have a blast in their company.

I have since sold the Baby Bjorn, nearly retired the Moby, realized the Ergo fits my husband but not me, and purchased my own Mei Tai and ring sling, both of which I use almost every day (the Mei Tai for walks, and the ring sling for errands or around the house). I am also the proud owner of a babywearing coat, thanks to my in-laws' generous Christmas gift, that fits over both Munchkin and I when the weather requires it. My husband keeps asking me, when we go on walks, if I want to put the boy in the stroller or wear him. It's a ridiculous question, I think. When he's in the carrier, I can see him, talk to him, point things out to him, know if he sees what I'm seeing, nurse him if he needs it, and he can fall asleep on my chest. Very soon, sooner than I care to think about, he's going to want to get down and run around on his own. These moments are fleeting. I love the bond that babywearing gives us, and I'll wear him as long as I'm able.
Posted by Marni
Posted by Metro DC Babywearing at 10:25 AM