Babywearing through Deployment (and beyond)

As some of you may know, April was the month of the Military Child, in honor of our littlest service members. The ones who didn’t sign the dotted line but are just along for the ride, and unknowingly are their parent’s biggest motivators, both home and away. Many who have talked to me know, a deployment is what really got me in to babywearing. I was interested beforehand, but when my husband left less than two weeks after our first daughter was born, I needed something to keep her close and still be able to get things done. Especially because until we figured out that she had food allergies, she was grumpy a LOT and didn’t want to be put down. 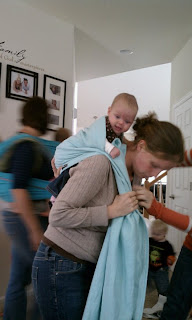 We used babywearing to get us through pretty much everything. Laundry, cooking, eating, traveling
through the airport, grocery shopping, going for walks, and of course, making friends. The best thing
that babywearing ever did for me was bring me to a new group of friends, which has grown and grown with every new duty station, as there are babywearers everywhere! The moms I met in my first
babywearing group, several of whom were also military spouses, were my lifeline. I went to my first
babywearing meeting when my daughter was six weeks old, and they helped guide me through sleeping habits, natural remedies for nursing issues, and through the maze that is food allergies. They helped me find carriers that worked for us by lending out their own at meetings and even to take home, and helped me get her on my back. We spent a lot of time traveling when my husband was gone, as we lived on the opposite side of the country from our families. Thanks to babywearing I was able to check my luggage, wear my daughter on my front, a diaper bag on my back, and navigate the airport hands free all while keeping her safe and close. 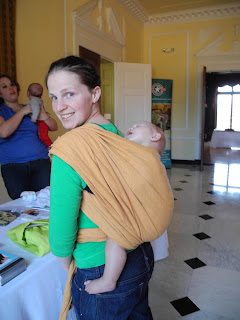 We have moved twice with my oldest daughter, who is just under 3, and now have an almost 9 month
old. My husband has been gone since right after Christmas, and if I thought babywearing saved my
sanity last time, this time it has been even moreso. I wear my youngest daughter every single day. We
wear to get household chores done, or to chase the older one around her gymnastics class, or to take a
walk to the playground. It’s really hard to run a double stroller across the street and hold someone’s
hand! I wore her at the beach last week when we went to visit some friends, and my older daughter
wanted to build sand castles and play in the waves. While she can certainly crawl and sit, and even walk a little, I didn’t want her trying to wander off or put anything from the sand in her mouth! Sometimes I’m wearing both of them- the older one is usually too busy to be up for very long, but when she’s sick, tired, or overwhelmed, it’s not uncommon for her to bring me a wrap and ask to go up. 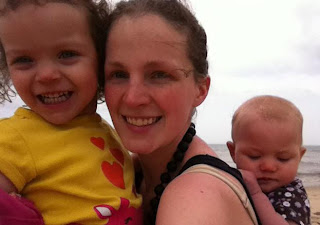 While babywearing has been a lifesaver for me here at home, it has also made a huge difference for my husband when he’s home. After he returned from the last deployment, my daughter recognized him from skype, but still often wanted to be “uppy mama”. We got an Ergo that was supposed to be for me, but my husband used it ALL THE TIME. They spent a lot of time bonding that way- she loved the higher view from his back, and he was able to hold her without fear of dropping her and carry her for long periods of time. When we were moving, and when we were house hunting, usually one of us had her up. We even helped friends move that way! 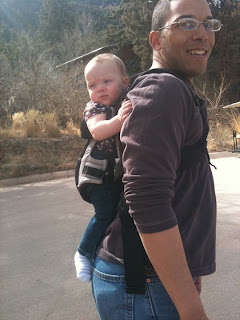 When I was pregnant with my second daughter I still wore her all the time, but when I was on bedrest and I wasn’t allowed to wear her, she rode on her dad’s back and on her uncle’s quite a bit. My husband was gone for training quite several times last fall, but for when he was home we bought a carrier that he could wear both of our girls in so that he was able to bond with both of them before he left. It’s wonderful knowing that when he gets back in a few months he will be able to pick right back up where he left off, and they will be able to have those moments together again.

Editor's note:  Kit has taken her experience with babywearing in a military family and has channeled it into a project providing carriers for veterans, service members, and their families.  To learn more and support The Carrying On Project, visit them on Facebook or at their website. 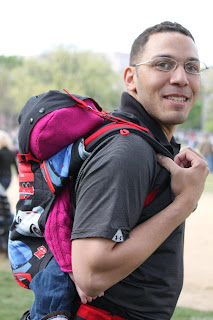 Posted by Metro DC Babywearing at 8:47 AM