Fun in the Sun and Spray! 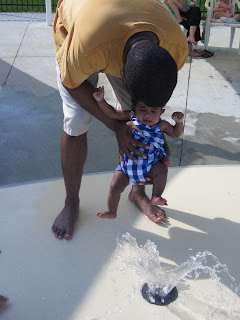 In May we found out about the new sprayground that was  opening at Lee District Recreation Center. On a whim, we decided  to go. My family includes my husband Jermaine; two-year-old AJ; three-month-old Callie; my sister-in-law Sha-Nae; my four-year-old niece Kyaria, and their grandparents.

When we first got the the sprayground, Callie was asleep so I let her sit with her grandparents under the tent in the shade. Once she woke up (5 minutes later, of course), we didn’t want Callie to miss out on the fun. We’ve always been the family that likes to do everything together so I never want one of us to miss out on something just because of the baby. I knew that it would be an awesome time to have a water sling, but I hadn’t ordered one yet. At first my husband Jermaine just held her and put her feet in the sprinklers. She hated it. So then I just decided to go ahead and wrap her so that she would feel nice and snuggly and close to  Mommy and wouldn’t be so scared of the water. I decided to use my Easycare woven wrap because it’s so thin in the heat and not that long (~3.7m) so it would be easy to wrap out in public. I put Callie in a kangaroo (front) carry because so that it would be easy to cuddle and 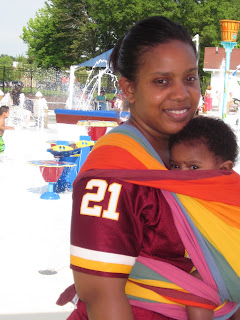 nurse her and ease her fears. It turned out to be awesome. Callie jumped and was a little scared the first time that the water hit her in the wrap, but being so close to me made her calm down pretty quickly.

My next task was getting AJ to have some fun. He *hates* water so he was literally hanging on my leg
at first. I had to act excited and jump through some fountains to get him to warm up. Eventually, he
started having fun as you can see in the pictures. He really liked the water table and the steering wheel
on the boat. 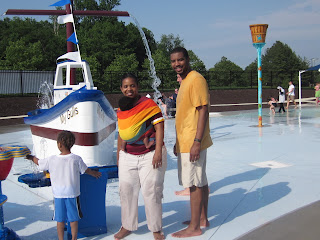 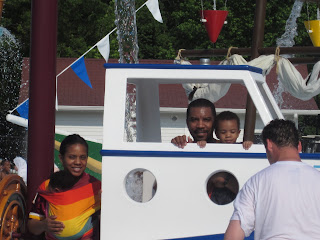 I also had my niece to chase around. She likes the water much more than my kids so it took all of us working together to keep up with her. Having Callie wrapped made entertaining and keeping up with the older kids so much easier. 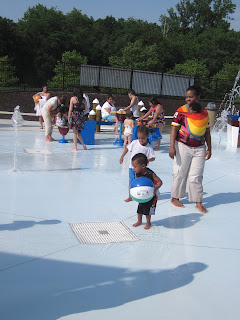 When I needed to nurse Callie, it was pretty easy although I did make the mistake of wearing a shirt that wasn’t the best for nursing (Sean Taylor jersey – go Redskins!). I slid her down in the carry and sat in the shade for a few minutes and nursed. By the time that we finished nursing, the kids were tired and it was time to go. The carrier also helped make herding everyone and everything back to to the car a lot easier. 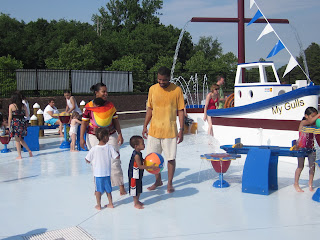 We had a blast on our first trip to the Lee Rec Sprayground. I was able to help my husband chase the kids, and Callie was able to be a part of everything. At the end of the day, I just hung my wrap up to dry, and it was fine in the morning. I still decided that I would get a water sling for our next trip to the sprayground so that it would dry fast, and because my Easycare is my car wrap, and I always like to have it ready to go.  We've been back a few times this summer, and the water sling has definitely come in handy.

Posted by Raagen
Posted by Metro DC Babywearing at 9:12 AM