Sometimes a baby develops opinions, and sometimes those opinions are quite inconvenient for your plans.  My second daughter wanted to be held at all times, but the first carrier I tried, a stretchy wrap, which I was sure was going to be the answer to her neediness, was NOT her idea of a perfect solution.  Until she was 7mo old, I couldn't use a wrap with her even though I really WANTED to be a wrapper.  Her opinions made mine irrelevant.  After trying a variety of carriers, I found that she preferred the way a mei tai or soft structure carrier held her.

This worked really well, and once she was content being worn and had gotten used to being carried and feeling safe worn, I was able to introduce wraps and ring slings.  Attending meets with BWI of DC-MD-VA made it possible for us to try a variety of carriers without having to purchase them all.  Meanwhile my third has been far less opinionated about which carriers she likes.  Although sometimes she chooses a specific carrier she wants us to use, she's a fan of the fishy wrap. 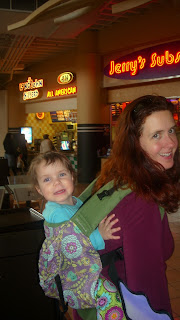 Another potential problem for a parent with an opinionated baby is that baby chooses a wearing position and doesn't want to abandon it.  My friend Lindsay's daughter decided that she liked being on her mom's front.  It was the better spot, period.  And yet, she would happily be worn on dad's back, or on babysitter's backs.  With a toddler, front carries can be difficult for longer outings because baby's head tends to be in your face, it is more difficult to see where you are going with a big kid in your way, and it can be less comfortable.  Lindsay was frustrated.  She was an experienced wearer on her second child.  Then one day we were out at the mall and she was trying to get her little one on her back, and suddenly her daughter pointed at me.  "You want to ride on her back?"  *nod*.  So, up she went on my back, while my daughter rode with Lindsay.  Flexibility and listening to the child helped find a solution to the problem.  Of course, then Lindsay was able to use, "want to ride like you do with Ann Marie?"  That got her over the back carry hump.  She also discovered that sometimes K would go along with a back carry in a wrap but not an SSC.  Once again, those opinions asserting themselves. 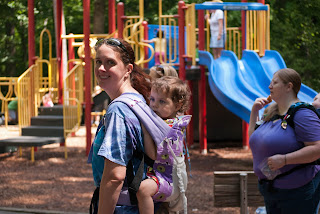 But even now, little K will come ask for a little ride with me.  We made a special bond during those months.  She's my little buddy now.  The important point though is that a child resisting a position on you doesn't mean they won't go along with it on the other parent, grandparent, aunt, uncle, or friend.  It might become their special thing.  Listening to your child and trying to figure out what they are telling you is an important part of a successful babywearing relationship.  I know some would say you should force the child to do what you want.  And certainly there are times when that is just the only option, but I find that when you do try to accommodate your child's wants when you can, it makes it much easier to explain and get them to go along when you just need them to be on your back while you carry all of the supplies for summer vacation to the car.  We've all been there.

If you are dealing with a reluctant wearee, come to one of our meetings to try out a variety of carriers and get help with the ones you have.  It's possible a minor tweak will help your child be happier in the carrier you have.  And happy wearing!
Posted by Metro DC Babywearing at 8:54 AM