With the holidays approaching, I'm going to toss in a little plug here before getting to our post about transitioning to 2 kids.  Sign up for iGive and support Babywearing International at no cost to you while shopping online at your favorite stores.  And if you decide you don't want to support BWI, there are plenty of other great charities you can support. 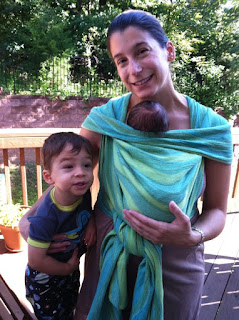 When my first son, Collin, was born in 2009 I was very eager to wear him. I started wearing him in a Moby Wrap and ring sling when he was a week old and then used

the Ergo from about four months on. I wasn’t comfortable getting him on my back until I came to my first babywearing meeting when he was ten months old. That was also the meeting that I discovered wrapping and a multitude of brands (and pretty fabrics) that carriers came in! Since he was born I have bought numerous wraps and carriers to wear him in. Wearing him helped us bond tremendously
throughout the early newborn stage. It also helped us manage the toddler stage where I could keep him safe and engaged while still getting things done. Even at two years old he still loves to be snuggled up in a wrap or carrier on mine or my husband’s back. 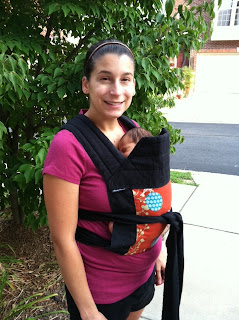 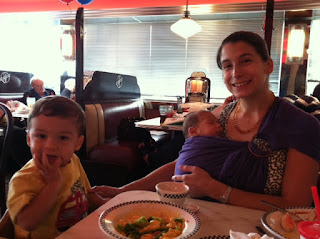 This summer, baby #2, Brennan, made his debut. Collin, just shy of two years old has no intent to slowing down. He runs, climbs, and jumps on just about everything he sees. Brennan and I needed to be able to keep up with him outside of the house. Babywearing to the rescue! In addition to keeping up with Collin, I am able to meet Brennan’s needs too. I can respond to his hunger cues early and nurse him just 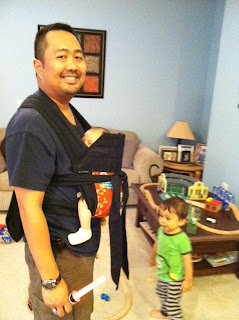 about anywhere. Being able to feed the baby hands free while caring for Collin has been a lifesaver. He falls asleep in the carriers whenever he gets the chance so I don’t worry yet about rushing home for nap time. He also gets more face time with his big brother since he’s not staring up at the sky from his car seat stroller. 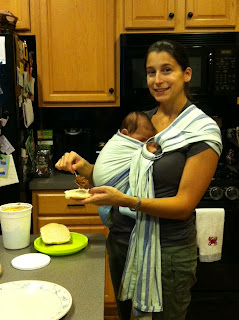 Some of my favorite carriers for Brennan have been ring slings in the tummy to tummy hold, a mei tai with the bottom cinched for  early and comfortable legs-out, and our infant adjustable sized Kinderpack soft structured carrier. Although cozy, he hasn’t taken to wraps much and they are just a little slower for me to get him into than the  other carriers. 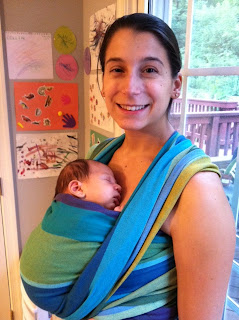 We get lots of comments while out and about- usually about how comfy Brennan looks all snuggled up and sleeping!  Babywearing has definitely made the transition to two easier on the whole family.

Posted by Kelli
Posted by Metro DC Babywearing at 10:42 AM