This past week we have all been moved by the devastation in Japan following the earthquake and tsunami.  One photo from the event that seemed to move many parents was this one of a grandmother wearing a little one in a traditional onbuhimo while trying to navigate terrain that would have been impossible with a stroller or for a walking toddler.  This got me thinking about how we might handle such an emergency.  Babywearing is not a tradition here in the way it is in Japan.  Our grandmothers are unlikely to pull a carrier from the closet in case of an emergency.  So, I'm going to show you how to pull a carrier out of your closet.

These are my supplies: 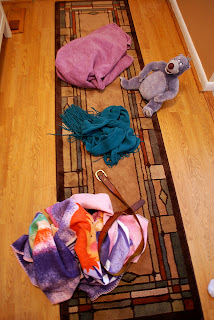 A towel, a scarf, a belt, and a fleece blanket.  All items you might have around your house, in your car, or on your person.   These are not items only a parent would have, these are items ANYONE could use to help children in case of an emergency.


First, for a newborn or small infant a front carry is preferred.  I don't have a newborn right now, so Baloo is going to play the part today.  With a newborn, you can just tuck in your shirt, tuck baby into the shirt, and I have added the belt for extra insurance at the bottom.  If you have a higher neckline, you'd probably want to cut it to make room for baby to have an open airway. 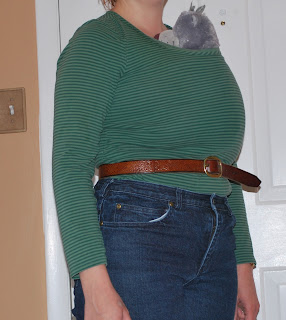 Now, in MOST emergency situations, a back carry is going to give you better mobility.  So, these are all back carries that can be done with an older infant or toddler.  Teagan is 15mo.

This is a strap carry done with a scarf.  This is done traditionally in Asia with a strap similar to a martial arts belt.  You don't want anything TOO thin, rope or similar would dig into baby's skin.  If you are a wrapper, this is done like a ruck tied under bum, but without the same width. 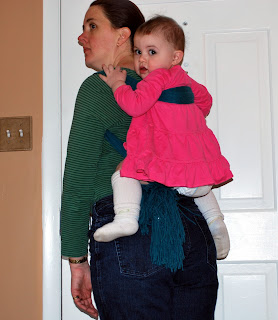 Another option is a torso carry.  This is the same carry as a kanga from Africa, but I've used a towel.  Knot above the breasts in front with the top, then below the breasts with the bottom. 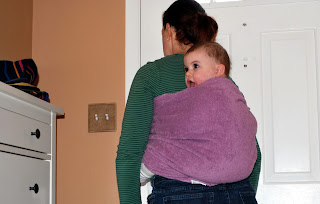 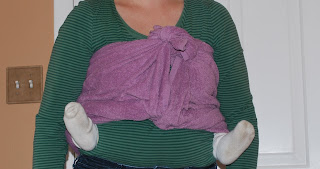 Another option might be using a fleece blanket and your belt.  This is borrowed from a Native American tradition. I've tied the top above my chest, and then used the belt to create her seat. 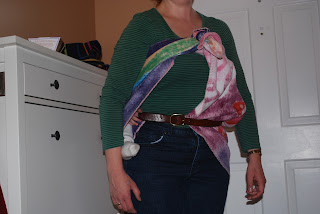 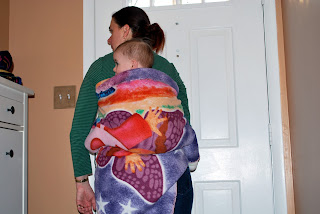 Now, some of you are currently in the middle of "baby days" and are thinking to yourself, "I never go anywhere without a carrier (or 10)."  So, let's look at what you can do with a carrier in case of  emergencies.

Many carriers have a long length of fabric.  If needing to cross a short bit of moving water, a wrap or mei tai could be secured to either side and then used as a handhold to ensure you didn't lose your footing.  Those straps could also be used to tie you or a child to a solid object out of the way of harm.  If trying to move several children, you may have to leave one somewhere that it wouldn't be ideal (in a tree), a carrier could be used to ensure they didn't fall.

What about an emergency while hiking?  Your family is on a short day hike, you brought a carrier in case the preschooler gets tired, but your teenager falls and breaks an ankle.  How do you get her back to safety?  Well, in a pinch, a carrier WILL carry an adult. 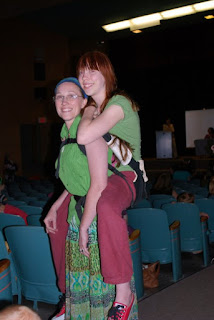 In an ideal world, no one would ever have to deal with a situation like the one in Japan.  However, we all know that sometimes bad things happen.  So, hopefully this helps you to prepare for a situation that you never face.

I received a message from an old school friend reminding me that some of this may not be clear to non-babywearers.  So, I'm going to post her questions here to try and help answer those questions.

For instance...
How is that scarf attached to child and adult?
Good question!  The middle of the scarf is behind her back and under her arms.  It comes up over my shoulders like a backpack.  Then I bring it back behind her and tie it underneath her bottom.  I know she won't fall out because her bottom is lower than her knees, this places the tie slightly between us.

Is the towel (next photo) just flat against child's back or up under her bum? How on earth does she not fall out the bottom of the towel?
The same thing as with the scarf, her knees are higher than her bottom, it is smoothed down her back and yes, tucked up a bit between us.

With the blanket and the belt, where does one decide to place the belt? By "creating a seat" do you just mean "a way to keep your passenger from sliding down?"
I place the belt just under her bottom, I'm creating a pouch, like a hammock chair.  Her bottom should be a bit lower that her knees (and it'll settle slightly lower than the belt) so that her bottom takes her weight and not her legs.

How tight are all of these cinches/ties?
Snug enough to be secure, but not so tight as to be uncomfortable.  You don't want them to be able to slip out or wiggle free, but you do want them and you to have plenty of breathing space.

Can one person arrange this on themselves (if so, HOW??) or does it take a second pair of hands to help?
Yes, one person CAN do these on their own.  I took all of these pictures with only my 3yr old in the house.  I put her up in each carry alone.  I'll be honest, most people would do well to have practiced a few times with a spotter before trying the first time, but in a pinch, using the scarf for example, I held it snug under her arms and then passed her over my shoulder, like Santa's sack.  Bend forward to create a table for baby to lay on while you adjust the ties.

Here's a good video of a kanga carry (like the towel) that shows another way to get the baby back there and creating the seat.   This video shows a Superman toss (my usual method for getting a baby on my back) and a ruck carry.  The ruck carry it similar to the strap carry, and it could be done with a bedsheet.

Hopefully that helps clarify some of the aspects to the non-babywearing reader.
Posted by Metro DC Babywearing at 9:41 AM