On Becoming a Babywearer: A New Wearer's Journey

My daughter was born on December 23, 2009.  I always thought of myself as being pretty good with children; I babysat A LOT growing up, I hang out regularly with my nearly 2 year old nephew, I have friends with kids.  But none of these things would prepare me for a baby who does. NOT. want. to. be. put. down. EVER.  She wants to be held 24-7 or more, if she could manage it. 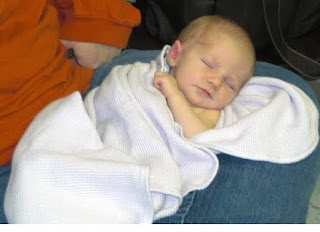 We had registered for a Boppy Sling at Babies R Us while I was pregnant, it looked comfy and convenient and we thought we’d give it a try.  But, after Margie was born we tried it twice and she would not tolerate it.  She fussed and wiggled and made the whole experience very uncomfortable.  Also, I didn’t think it looked “right” I found myself lifting her up (still in the Boppy Sling) and cradling her just like I would have if she were not in it.  I had basically resigned myself to the fact that I would no longer have arms and wouldn’t be able to do laundry, dishes, or basically ANYTHING until she grew out of this phase or went to college (whichever came first)!

I was lamenting the loss of my arms in on my Facebook status when Margie was about a month old and a friend from college suggested I attend a “Babywearing Meeting.”   “A babywearing meeting?”, I thought to myself… that sounded kind of hokie and Austin, while I love her, is a bit “crunchier”  than I am.  I really wondered if this was for me.  But, I was willing to try anything at that point.  She provided me with the links to the blog site and the yahoo group.  I read some of the blogs and looked at the pictures.  I immediately noticed how generally happy the children AND parents looked in the photos of babywearers.  And, best of all, they had use of their arms & hands!

My husband and I agreed to meet Austin at the February Babywearing Meeting in Tysons.  It came right after one of the big snow storms.  I brought my “sling” along with us figuring the leaders could give me advice on how to use it.  Well, it turns out that the Boppy sling is just a knock-off of the Infantino bag of death sling.  It was recommended that I take the sling, cut the strap, and never, ever, put a child in it.  My instinct to lift her was right, and I guess Margie also knew it wasn't safe, that's why she fussed. 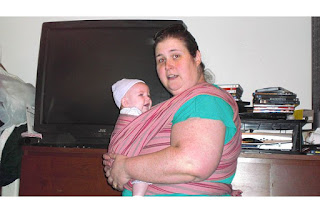 Because of the snow, not very many folks made it to the meeting and I felt like the demo portion of the meeting was done just for us!  After watching Ann Marie try on carriers and explain the differences, Don and I tried out a Baby Hawk and a Kozy Carrier.  I tried out my first wrap, and also tried a ring sling, which, sad to say, Margie wouldn’t tolerate.

As we were leaving, Don and I agreed that we should get a Mei Tai for both of us and a wrap for me.  We thought that should be enough for us to regain our sanity by having the use of our arms.  We bought those two and, well, a few others, but my addiction to carriers is a topic for another blog…

We still use a stroller on occasion, but most of the time, Margie is worn.  Ever since I got my first carrier, I’ve worn Margie while walking the dog.  I wouldn’t think of going to the grocery store or wholesale club without a carrier.  And in church, I have the best behaved baby! In March, we went out to dinner at a Japanese steakhouse to celebrate my husband’s birthday with some friends.  I knew they would want to hold her, so we carried her in her car seat.  Once they started cooking on our table, she started getting fussy and all the spare hands suddenly had something else to do.  So, I pulled out my trusty wrap and wrapped her up.  Most people in the restaurant that noticed us were impressed as was my brother-in-law.  My sister did remark, “how many of those things do you have?” but oh well!  As soon as she was snuggled in, Margie was out like a light and I had both hands free to eat my dinner and celebrate. 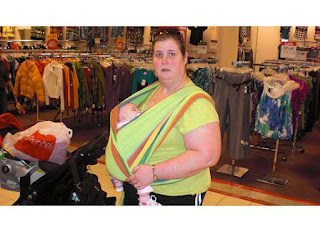 Just before Easter, we went to Fair Oaks Mall to visit the Bunny.  We decided that we would leave her in her car seat and click it into the stroller.  My thinking was that it would be easier to extricate her from the stroller to see the Bunny than from a carrier.  And while it was easy for that purpose, when we got to shopping, we found the stroller not only cumbersome, but as Margie got tired, she got cranky.  So, up in Gymboree, with other parents and the employees watching, I pulled her out of the stroller and wrapped her up.  I would say that within 5 minutes, she was sound asleep on my chest.  The employees were amazed!  And I again had both hands with which to shop.  I didn’t need to worry about her, I knew exactly where and how she was.  I am beginning to wonder why I even try to mess with the stroller anymore, but then I look at how many shopping bags it holds, maybe we'll keep it after all.

I must admit that while my husband was all gung-ho at his 1st babywearing meeting, apparently, he was only gung-ho for me.  He realized it benefited us, but I had to be the wearer.  I had him pick out the fabric on the Baby Hawk so it was more “his” than mine, but he didn’t find the babywearing love until just the other day.  Since he’s home with Margie 2 days a week while I’m working, I kept suggesting he wear her, but to no avail.  He would always carry her when walking the dog, which scared me.  I feel like it’s too much to juggle the baby, the leash, a 90 lb dog, and pick up poop.  I had ordered a really cool Ergo which I knew he’d love without him knowing.  When it arrived, he couldn’t wait to try it but we needed to get the waist extender. 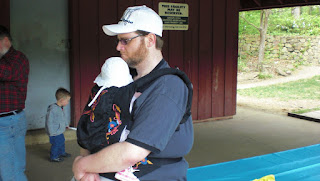 So, the morning of the very first day he had her alone after we got the extender, he had her in the carrier and ready for the dog walk so they could walk me to the car.  She was smiling and happy riding on daddy!  When I was about ½  way to work, my cell phone rang, “Margie fell asleep in the carrier on our walk” my husband exclaimed.  I had to bite my tongue so as not to say, “I told you so!”  They proceeded to have their best day together, by far.  No screaming, no tantrums, and Margie did well too!  And Don is now a babywearing believer!  HE wore her at our nephew’s birthday at the park over the weekend. 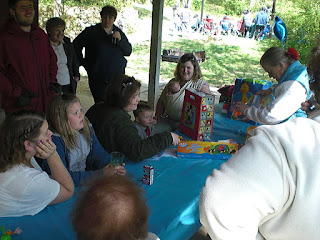 Clearly, we have benefited from the intended consequence of babywearing outside the house: like at the grocery store, the mall, BJ’s and around the house while doing dishes, laundry, and walking the dog, just to name a few!  But, I also found something completely unexpected. 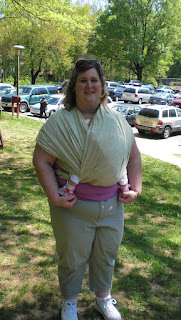 I found a group of fabulous moms and dads who I never would have met had I not started babywearing.  The members of this group are the most generous and kind people I have honestly ever met.  They will literally loan you the carrier off their back to aid a parent in need.  And it’s not just about carriers… they offer the best advice about breastfeeding, high chairs, general parenting, etc and will really go out of their way to help a new mom or dad.  So, not only did I “find” my hands again by babywearing, I also found a whole new group of people I can truly call friend.

I will be eternally grateful to Austin for the invite.  I learned that while I’m not crunchy, I’m not creamy either.  So, does that make me nougetty?

Posted by Mary-Rose
Posted by Metro DC Babywearing at 7:48 AM