Many Layers - Wearing with Head Coverings

When I found out about wrapping in 2012 and headed over to The Babywearer online, one of the many things I loved about it was the diversity. There was someone who looked like me in the banner — a mom wearing a headscarf. (OK, maybe not exactly like me — she was a lot skinnier, but still. It made me feel at home.)

Babywearers are from everywhere. I love this little microcosm of the world, brought together by the universal love for our babies.

My own babywearing experience has intersected with my experience as a Muslim American woman in a variety of ways. I hadn’t really thought about it much until I was asked about how my headscarf impacts babywearing.

First, the practical: When I was learning to wrap, there was definitely a lot of fabric going on. First, does the scarf go over or under the wrap? And you’ve already got the wrap catching your shirt — add a scarf while you’re still getting used to back carries and there’s fabric tangled everywhere. Once or twice I ended up with my head pulled over to the side, with all the grace of a young horse trying to scratch its ear with a rear hoof. (If you haven’t seen that, believe me, they do that, and they still have better balance than I do. Granted, they do still have three legs on the ground.) Anyway, I learned quickly to flip my scarf out of the way or lean my head forward to create enough slack in my scarf. Problem solved.

When my baby got older and got the memo that he was supposed to pull out my hair, I chuckled. HA! I had the solution. I put on a scarf. Then he pulled on my scarf and tried to strangle me. Sigh.

For some women who wear a scarf as part of a choice of overall modest dress, there’s the issue that some carriers and some wrap carries accentuate the chest. As one friend put it, “Hello, boobs!” Well-placed scarf tails can help with that.

Some people ask if we’re hot in extra layers. My thin scarf is not what’s making me hot — it’s the little heater on my back causing that. But I’m fond of the little guy (plus, wrap snuggle!), so he can stay. At least longer clothes also mean less sweat, sunblock or other toiletries on the wrap. This is a good thing because with three kids, I’m washing enough emergency laundry already that if a wrap makes it into the pile, I may not see it for awhile, and I will miss it. Once in awhile, I make sure to visit and say hello to my old permastash Gira ring sling that’s been waiting for a courtesy bath for … maybe a year? So less laundry is better here.

There was really only one practical issue that lasted — matching. I had a system built up over the years — solid-colored shirt and a patterned scarf to match. Voila: dressed and out. Wraps messed that all up. I drooled over tri-colored Zaras on the swap, looking so elegant on a simple wooden table for their beauty shot. They did not look so elegant next to my floral scarf. I have relatively low standards for being presentable, but I couldn’t work with poor Zara tri-blue — sadly, it was just too much. The natty phase was a bit of a relief. 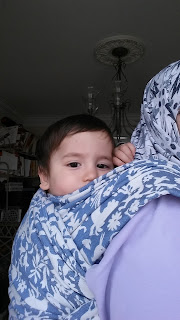 Wraps did give me some great ideas for scarves though. I found a scarf with a purple to white grad and made it mine. Now that I’ve gotten my loom up and running — yes, I’ve reached that stage of babywearing — I’m planning to weave lots of scarves in grads.

With most practicalities out of the way, there remains the issue of visibility. When women go out in a headscarf, we stand out. When we go out with a baby in a wrap or carrier, we stand out. Add both and you are definitely a curiosity. I’m used to that, though, so I quickly stopped caring.

A babywearing and hijab-wearing friend pointed out that the baby in the carrier diverts some of the attention away from you. We’ve both struck up good conversations with strangers who otherwise might not have talked with a Muslim. In today’s climate, with rising Islamophobia, we truly welcome those interactions.

Another babywearer who chooses to cover her face wrote her thoughts on this: “I get a lot of looks, and many times people are nervous when they see me, but babywearing often puts them at ease or is an ice-breaker. Just the other day a man stocking the dairy section at the grocery store shouted out to me, ‘Wow! I love that back pack thing!’”


And that’s really what it all comes down to. No matter what we wear, or where we’re from, or what you did (sorry, wrong song), we all appreciate these back pack things and the sweet babies in them. Thank goodness for babywearing! 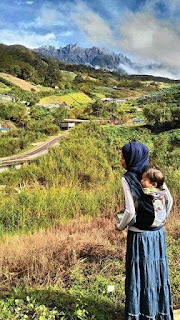 Posted by Lina
Photos provided by wearers from around the world
Posted by Metro DC Babywearing at 9:25 AM