March of the Babywearer! Coaching while Wearing

When we found out I would be having my second child in July, one of my first thoughts was “Not during marching band season again!” As a color guard instructor for a local high school’s marching band and competitive indoor winterguard program, the end of summer kicks off a busy season of training camps, rehearsals and performances that lasts from when school lets out in June until early April. My daughter Sam was born in fall of 2011, smack in the middle of this crazy schedule. As a result, I missed the remainder of the season caring for her. As a veteran parent, and a more experienced babywearer, I knew I could handle the demands of coaching with a baby and preschooler with me from the start. So when my son, TJ, was born in the summer of 2014, I started attending BWI meetings as often as I could to learn as much as I could so I could arm myself with as many babywearing skills as possible to help the season run smoothly. 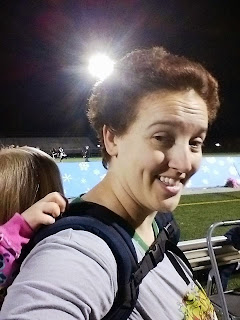 I did end up missing most of marching band season while I kept TJ away from crowds during his infancy (except for a few short visits to practice and training camps throughout the fall). Sam attended several performances with me, being worn on my back since her feet would often tire during the long walks during warm-ups at marching band competitions and football games. It also kept her close so I know she wouldn't try to join the performance - she thinks she is part of the marching band too! Sam is also not too keen on loud spaces, like crowded football games, so being able to wear her gave her a place for her to be close to me and feel safe while I was still able to help where I was needed with the marching band.
By time indoor colorguard training began in November, I started taking TJ to rehearsals with me. Kept close to me, on front or on back, TJ experienced 5 months of rehearsals and performances while being kept safe, close and secure. As an added bonus, with TJ being worn, I had two hands to help keep Sam from becoming too overzealous about performing during practice, too. Saturday rehearsals and shows are the most demanding days in the winter competition season, and my students found it amazing that TJ would sleep for an hour or more in his carrier while I did my job coaching them. The high schoolers would watch in amazement as I would hoist TJ on my back, snap up my SSC or tie off my wrap all while counting off a warm up or giving performance feedback. 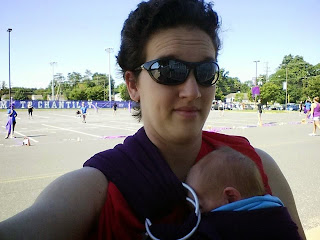 TJ rarely fussed or whined while being worn because I was able to read his hunger cues and respond to his needs very quickly since he was so close to me. Feedings and diaper changes gave him breaks from being worn. On days when practice or performance demands lasted more than 3 hours, my husband would keep TJ and my daughter home in the morning, bring them to rehearsal for a few hours to be worn, then take them back home for dinner and bedtime. Getting those few hours midday to give TJ a snuggle without really having to abandon my role as a coach was a great way for us to be close in a sometime hectic environment. 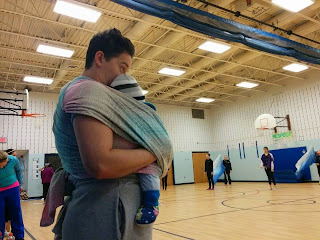 I was always overly cautious (and will continue to be) while wearing TJ (and Sam!) and marching band and indoor guard rehearsals and events. I followed the general rule of “don’t do it if you wouldn’t do it while holding a baby/child” and I gave my students a few extra feet of buffer space if they were spinning flags or other equipment near me. I am so grateful for babywearing because this time around I was able to continue teaching and passing on my passion for the marching arts without sacrificing all of my rehearsal time away from my children. I am looking forward to many seasons to come with this band and indoor guard, as they were very open and accepting of babywearing as my solution to being able to juggle parenting and coaching together.  Who says you can’t do it all?
Posted by Stephanie N.
Posted by Metro DC Babywearing at 9:05 AM