In the winter of 2010, the day after Christmas, my husband, J, set off to Virginia from California with all of our belongings in one of those big yellow trucks.  I was eight months pregnant at the time, so I flew up about a week later once he and my father in law got everything unloaded.  We moved from a small little two bedroom ground level apartment in a middle of nowhere town to a three story town house on the outskirts of the DC Metro area.  The culture shock was staggering.  Having to haul my huge self up and down all those stairs was exhausting.  Add to that all the things that need to get done after a move like that-new license plates and driver's licenses, figuring out just where in the world the grocery store is, finding a new OB at pretty much the last minute, etc.-I bet you can guess how much unpacking I got done while I was still pregnant.  Not much.  The baby's room got done though!  Two months after the big move, I gave birth to our first son, D.  My first non-baby related thought?  How am I supposed to unpack now?  This tiny human needs to be in constant contact with me.  We left all of our family and friends in California, so we did the best we could unpacking on the weekends while D was sleeping.  That is, when we weren't sleeping ourselves.

When D was three months old, J went on travel for three months.  I was on my own with this new 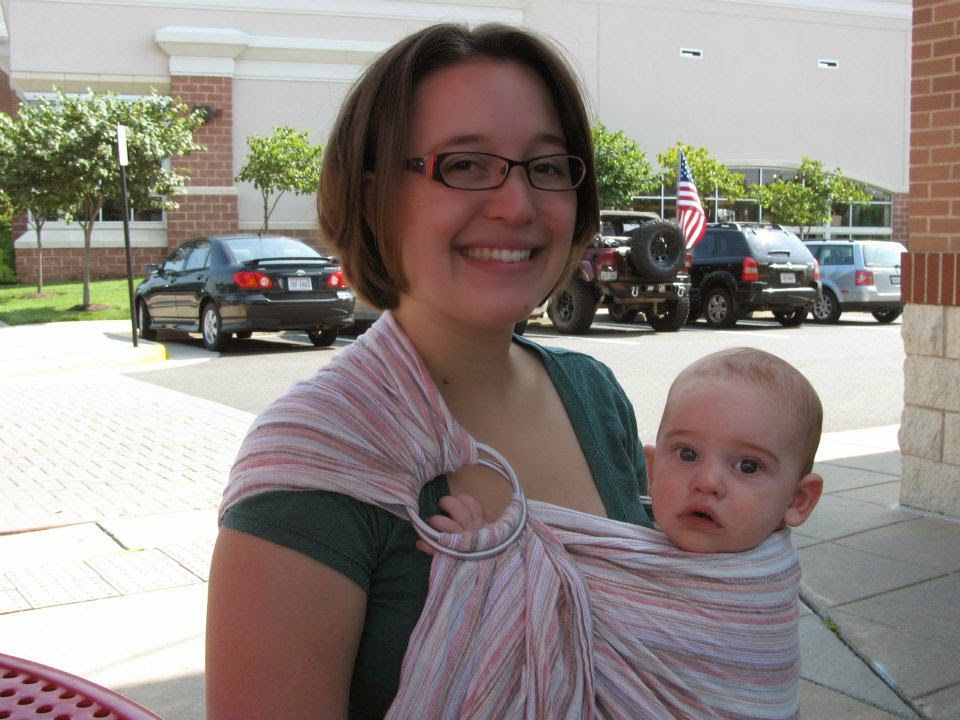 baby and a house that was still half full of boxes.  My goal was to have the house put together before he got home.  I started using cloth diapers around this time, and it was while shopping at the local cloth diapering store that I was first introduced to the idea of babywearing.  I walked in carrying D in his car seat, and the first thing I saw was the employee behind the counter wearing her baby in something that looked like a backpack.  I asked her about it. I walked out that day with my first carrier and information about a local babywearing group.

All of this back story to get to the point of this post: how babywearing helped me during our move. What a huge difference it made!  No longer did I have to wait until my son was sleeping to unpack as many boxes as I could before he woke up.  All I had to do was put him in our carrier, and I could get things done.  I had my hands back!  He loved being snuggled up to me, and I loved it just as much.  Probably more.  I managed to get the majority of the house unpacked by the time J got back, and was able to keep my baby close while doing it.

Fast forward two years, and we found ourselves getting ready to move again.  Packing is enough of a chore without a two year old trying to "help."  For this reason, I wore D quite a bit while packing.  While J was at work, D would play until he started causing trouble, then I'd put him up on my back and continue to pack.  At our new house, D was much more interested in exploring than helping me unpack, but just before we moved I found out that I was pregnant again.  Yay for a new baby!  Boo for being pregnant during the move.  I was EXHAUSTED the entire 40ish weeks, and the only time we got any unpacking done was on the weekends.  Long story short, I again ended up with a new baby, L,  and a house half full of boxes.  Luckily, this time I already knew about babywearing.

Posted by Metro DC Babywearing at 9:52 AM