My Nanny Wears Me Too! 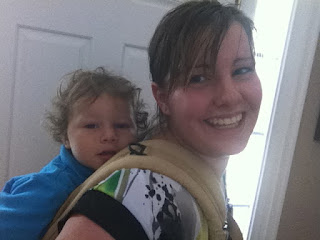 Ever since I was very little, I have loved holding babies. Awake babies, sleeping babies, even crying babies. I loved to hold them all. So naturally, when time came for me to start babysitting, and mothers offered me carriers to wear their children, my reply was "Yes, yes YES!". Unfortunately, in the beginning, all of the mothers I sat for had Bjorns, and so that is what used. I found them rather uncomfortable most of the time, but I would much rather wear the baby then not, so I just dealt with it. Finally, a mother I knew had an Ergo. I had seen her wearing it a couple of times, and I was really interested in it, as I had never seen anything like it. I kept asking her questions about it, and one day while we were at an event together, she offered for me to wear her little one in it for a while. (Thank Heaven for that sweet Mama!!) Just a few minutes after putting it on, I was in love with it! It was beyond comfortable compared to the Bjorn, and the baby was snuggled right up next to me, so she fell right asleep. I wore the baby around for almost three hours that day, and was sad when I had to take it off so the mama could head home. 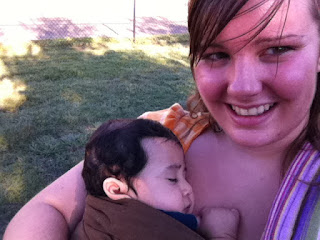 After a little bit of "hinting"  (I would leave the Ergo homepage up any time I was on the computer... for an entire month!) to my parents that I wanted an Ergo, finally, I received it for my birthday. To this day, that was probably the best birthday gift I have ever received. I immediately started using it while I babysat, and a few months later I got a regular nanny job with a family.


As a nanny, I perform many of the daily tasks mothers perform (this includes, cooking, dishes, laundry, cleaning, etc.) And  of course, wearing children while doing these tasks (as most of you know) makes them so much easier. It also has created a special bond between me and many of the children I watch. Most of the children I nanny for absolutely love to be carried, and a lot of times as soon as I walk in the door they children will ask to "ride on Miss Rebekah." I also wear to comfort them, whether helping to distract them from a parent leaving, or if they are just having a bad day. Baby wearing also helps me when I take the children on outings. I know that small children will be safe when we are out, because most of the time they will be strapped to me. I also know that I will then have free hands to push strollers or hold hands with older siblings that like to walk. I remember one particular day when I took five (yes, five!) children to the zoo. I could not have made it through that day without my Ergo. The two year old, (who was the youngest) was on my back nearly the entire day, which allowed me to also push the double stroller that was carrying two other children and lots of stuff! The two year old had a bit of a cold that day, and wasn't feeling too good. Because I was wearing him, he was able to nap as much as he wanted, whether we were in a stroller friendly exhibit or not. I can give examples of countless other times when a carrier has saved the day. Whenever I forget a carrier, I always end up needing it! I have learned to keep a carrier on me at all times, even if I am not planning on nannying that day. 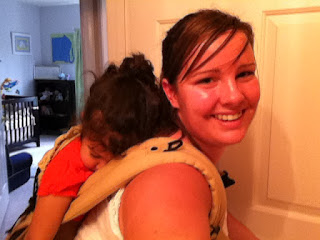 I bring my Ergo and Maya Wrap with me every where I go. One of the mothers I worked for mentioned in her letter of reference that I had my own carriers. Now anytime I meet a new mom she will read the letter and say "oh? You do! That is soneat!" I have found the most mothers are thrilled that I will wear their children, in fact I have even helped some moms choose and buy carriers for themselves. Babywearing has become a part of who I am, as well as something that I have come to rely on anytime I nanny.
The very best part about babywearing is the fact that I can return the children to their parents at the end of the day, knowing that I have given them the absolute best care I possibly can, by keeping them safe, and providing for all of their needs. And that is worth the world to me.

Posted by Rebekah
Photos used with permission from parents
Posted by Metro DC Babywearing at 4:04 PM