Part 2 in our series on babywearing with triplets. 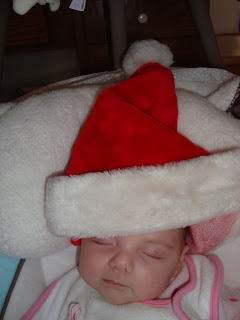 As an early Christmas present our baby girls were taken off their apnea monitors! We were thrilled and finally could move around with the girls. After having been fairly immobile during the second half of my pregnancy, being horribly sick after the babies’ birth and being strapped to monitors I kept forgetting that I could walk around and go places.  I was asking people to get me things when I could, in fact, get them myself! As I got used to the freedom it was wonderful to move around more with the girls, and S even got to go to the bus stop one day.

As the Christmas season entered full swing I was determined to give the big kids a regular, magical holiday season. Mostly, I think that I reached my goal. Christmas decorations were up quickly and Christmas stories were read each night before bed. An important part of Christmas, for me, is baking together, and thanks to baby carriers, help, and persistence, we were able to bake a few times. It was a combination of organization, lack of sleep, and tons of help from friends (and strangers!) that we made it through the holidays and kept it magical for our kids. 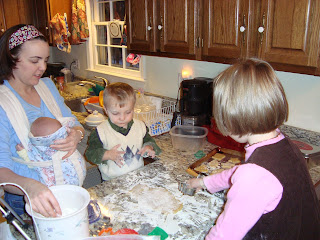 for me.  Our babysitter watched the kids while we decorated. One of N’s preschool teacher’s teenage girls wrapped all our presents.  My parents visited and did laundry and held babies. We still had meals in our freezer from generous friends. The list goes on and on. So, while I was determined to make Christmas normal, so was everyone else around me, which is how it all really happened.

Of course, on Christmas Eve, the babies were wide awake and fussy when we were supposed to be putting presents under the tree. Thankfully, baby carriers work just as well in the middle of the night as in the middle of the day. In the end there was a tree with gifts stuffed underneath and memorable smiles with squeals of delight from my children on Christmas morning. I can only imagine what next year will be like with a 6 year old, 3 year old, and three 1 year olds! 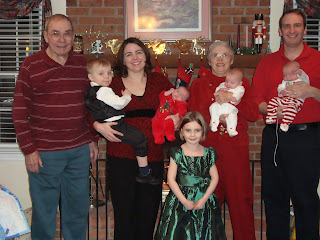 Email ThisBlogThis!Share to TwitterShare to FacebookShare to Pinterest
Labels: triplets