Hmm, I write about half of the posts in this blog, but somehow, I've never told my babywearing story.  So, today, in honor of International Babywearing Week, I bring you my tale.

My oldest daughter, Savannah, was the "perfect" child you read about in books.  The easy, happy, content, long sleeping child.  We knew we were absurdly lucky, and were happy with our good fortune.  I spent much of my day with her propped on my legs so I could hold her and also have my hands.  She was happy in this position, and happy to be put down when I needed to do so.

When I was pregnant, I had registered for a Snugli which I was given, so early on we tried taking her for a walk in it.  My husband wore her the first time, we went for a walk around the neighborhood.  The next day I took it with me to the mall, I knew it would be wonderful to walk around with her in a carrier and not in the stroller.  I hated the stroller, I hated dragging it out of the car, I hated trying to get it through the door, I hated searching for an elevator, I plain hated it.  However, I got to the mall and tried to put on the Snugli... I couldn't figure out how you put the baby in it without dropping her.  How the heck was I supposed to snap a  heavy gauge snap with only one hand?  And to use 2 hands, I needed to let go of her, didn't they realize this?  Disappointed I took it off and dragged out the stroller. 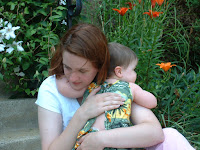 quick trip.  The LC at my breastfeeding moms group at the hospital recommended a ring sling.  I bought the heavily padded sling she suggested in a large so my husband and I could share.  What I discovered was that now I couldn't get it tight enough to be secure.  So, we used it a few times when it was necessary (the airport), but generally I was stuck with the stroller.  But, as I said, she was the most laid back child in history, so she was content and we muddled along. When my oldest was 2.5 and I was pregnant with my second daughter, I announced that I was done with the stroller and she would have to walk from here on out.  I began searching for a better stroller because I thought maybe my hatred of the stroller was a function of the specific one I had.  I didn't find one I liked better before my second daughter was born, so I got a Snap N' Go for the car seat and figured we'd get a new stroller when she got bigger.

Well, she was born and wanted to be held by mommy every moment of the day.  She would only fall asleep while being bounced upright on my shoulder in the burp position.  She was almost a month old when I heard myself in an irritated voice tell my 3yr old, "you can't eat now, the baby just fell asleep, you'll have to wait."  I realized this wasn't working.  I began researching.  After almost a month of research I had determined that there wasn't one perfect carrier, so I made a deal with my husband.  I was going to get one carrier now, and then give one to the baby for Easter.  I was going to get a Moby Wrap for around the house and long carries and a Hotsling for quick trips.  I was so proud of myself.  (this is more amusing when you know the absurd number of carriers that have come and gone since).

Well, I got the Moby at the breastfeeding center at the hospital (they'd moved up in the world since they sold me that horrible padded sling).  I wrapped her up and thought it was genius.  Unfortunately... Siobhan did NOT think it was genius.  She thought the mean mommy was refusing to hold her properly.  Then I got the Hotsling on Easter and popped her in it for Easter Mass.  By the end of Mass, I was sure I was doing something wrong.  I was ready to cry.  I'd pushed so hard for these 2 things, and here they were not working.  My 3yr old didn't seem inclined to go along with not being fed for the next year.... what was I going to do?  I found out about the local babywearing meetings, and discovered there had been one that day.  I'd missed it. NO!  All I could think was, "I have to go another month?  Really?  A whole month before I can get help?"  Then an email arrived announcing another meeting.  They met more than once a month!  Angels sang.

That Saturday, I was the first person in the room.  I had my tiny crying machine and my 3yr old.  I had my Moby.  I was ready for help.  They had me wrap her and said, "you're doing it right, she just doesn't seem to like it."  Now what?  I tried on a mei tai, and she fell asleep.  She was asleep and I didn't have to sit still afraid to move! I could feel my left arm!  I also found out they had another meeting coming up later that week.  I was determined to be there and sort out the Hotsling.  Well, at that meeting we discovered the Hotsling I got was too big which was why it wasn't working right.  They lent me a mei tai.  I took it home and decided I was going to learn back carries.  I envisioned trips to the playground without trying to awkwardly watch a stroller and push the swings at the same time!

That was the beginning of a revelation for us.  I found some carriers that worked for her.  I found that when nothing else was working for Siobhan, I could pop her in a carrier and she immediately settled.  That is still true now at 2.5yrs old.  It helped her become secure enough to let go of mommy.  It also was the beginning of having mommy friends.  I had tried so hard to find some friends when my first was born, and I just failed.  I was terribly lonely during the days until my husband came home.  But through babywearing, I found parents who were accepting.  They may not have been "just like me," but they liked me "just like I am."

Even Savannah, my oldest, finally got a chance to be worn properly. I've since had our third daughter.  Teagan was worn from birth.  I now know that this was what I sought way back when my oldest was born. I was able to care for both of my older girls while also seeing to the needs of the baby. Carriers are more convenient for me and make it so that I don't have to take a stroller 99% of the places I go.  They also help my children feel confident, relaxed, and less stressed.  I can take a stressed or frightened baby or toddler and pop them in a carrier, and it is like they have found their own cone of silence.  There is a confidence that "all is well in the world and nothing can remove me from my safe spot on mommy."  And nothing can compare with the snuggles you get from a worn baby or toddler.

Posted by Ann Marie
Posted by Metro DC Babywearing at 11:20 AM